An intricate and unusual 7-loop braid —the word for braid was spelled some funny ways in the 17th C. manuscripts— is the basis of the 14-loop alphabet braid.

The braid was referred to as “spanish” in the original 17th C. (English) manuscripts. Spanish braids were a mysterious class of braids of 5 or more loops that Noémi Speiser had trouble decoding from the original directions—here’s an example:

“Do the spanish breadth, but without taking the private stitch.”

The so-called ‘directions’ in all the 17th C. loop braiding manuscripts assumed a lot of previous knowledge on the part of the reader! 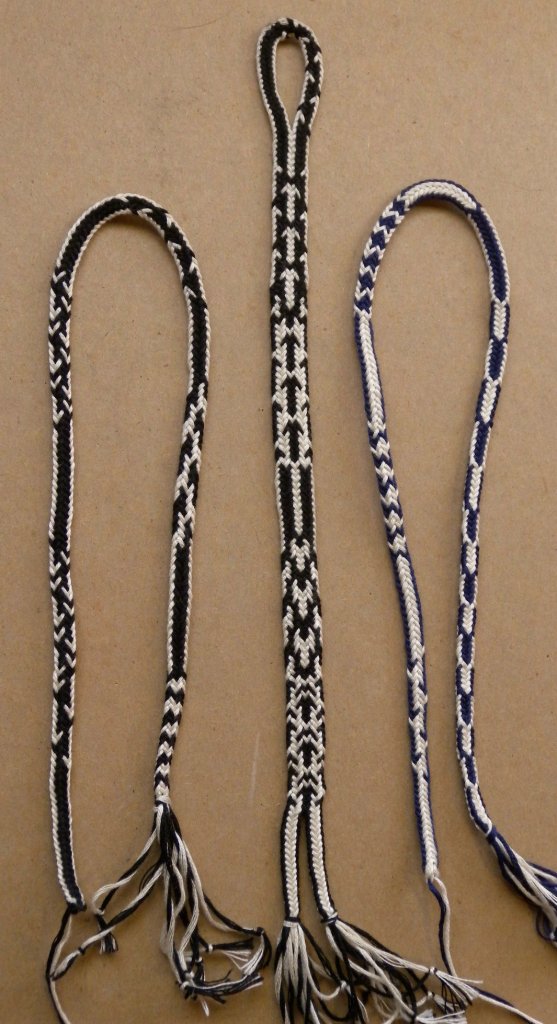 The 14-loop letter-braid of my two previous posts is a doubled (two-braider) version of this 7-loop spanish braid. Apparently, this 7-loop braid was never described on its own in the old manuscripts, only as part of this doubled version, in the directions for making a particular type of letterbraid. (Two braiders cooperating—each braiding a 7-loop spanish braid, and trading their nearest index-finger loops after each cycle in order to connect their work into one braid).

I made a few of the 14-loop letterbraids using a solo-braider workaround method, and following Joy Boutrup’s charts for the letter-shapes. Then I got curious about how this braid would look without the letters.

I decided to start with the component 7-loop braid. (The only difference was that I turned all the loop transfers—since I wanted a solidly rectangular braid-shape rather than the two-divided-layers of the letterbraid version.) Seven loops, bicolor, in just two colors. You don’t have to use bicolor loops to make this braid, btw, I was just curious to see what patterns they would make. First I made a few pattern samplers of the 7-loop braid, then I made a sampler of some of those patterns doubled into a 14-loop braid.

A spanish braid requires four loop-transfers with each braiding cycle—twice as many as a square braid. Even though these transfers are performed by a single braider, this is very similar to the 2-braider, doubled square braids of 10 loops in the old braiding manuscripts, the ones called “purse-string with the wave” or “with crowns”, etc. They also have four loop transfers per braiding cycle… The old documents didn’t have a general term for these braids, only for some of their color patterns. I’ve been calling them double braids, based on Masako Kinoshita’s term “double-square braid” for a similar kute-uchi braid.

You can see two traditional double braid color patterns in my two 7-loop samplers (see above). The sections with lengthwise bands of color are like the “Edge” pattern, and there’s a slightly lopsided “Crowns” pattern—lopsided because of the odd number of loops.

The only thing I varied was the dark/light arrangement of loops at the beginning of each pattern, the braiding method is the same throughout all the patterns.

I liked the 7-loop braid variations in themselves, but it was really fun to see how they came out when doubled into a 14-loop braid.  Whole new patterns emerged. I’m starting to think about making a long, less crowded sampler in heavier yarn for an instrument strap that a friend has been requesting. There are still more patterns to try….

Even in a square braid there’s always a slight widening of either the top or bottom layer of the braid depending on which direction you turn your loops—turning them from above makes the back wider, turning them from below makes the top wider (see pics above).  It gives this braid a  tendency to curve a little. I think that’s also why the weave looks different on the two sides.  I should probably try making some samples with half of the loop-transfers in each cycle turned from above and half from below. [see footnote below] This is not a very appealing idea… I’d much rather try some more color patterns!  I also want to try doubling some of these same patterns, but off-center so they don’t have mirror-image symmetry.

2-14-12 New info: it turns out that indeed the braid will be completely straight in cross-section if all the loop transfers on the left side are turned clockwise and all the ones on the right are turned counterclockwise. Or vice versa. Thanks to Gary in the Canary Islands for pushing me to confirm this!

This means a completely even mix of turns from above and turns from below on both sides of the braid. On the left half of the braid, all the loops that are being pulled toward the right will get a turn from above, while all the loops that are being transferred toward the left will get the equivalent of a turn from below. In both of these cases the resulting turn is actually in a clockwise rotational direction, as seen from the braider’s point of view. The opposite will hold for the right half of the braid. This principle holds even for the component 7-loop braid–. [Yes, same result with the doubled braid.]  But the results are very conclusive with the little 7-loop braids, they are so straight, with such neat, squared-off edges when the turns are done this way… And I had already found this to be the case with my “Rainbow Girl” braids, which have even more loop transfers per cycle than the 14-loop doubled spanish braid.

I don’t know why I was so reluctant to try this out initially! It’s very simple to do, no big deal, and makes a big improvement in the appearance of what are already very attractive braids.

Here’s how this would be done for two braiders cooperating – it likely wasn’t ever done historically as it’s not very intuitive, but it has nice results:

Updates — My next post “Why Spanish?”  has instructions, now including a video tutorial,  for the 7-loop Spanish braid. It’s just for the braiding moves—you would still need Boutrup’s letterbraid monograph, and a braiding partner, to make the letter-shapes. (There’s a chart for each letter that shows when to turn which loops).  I made the tutorial so this great 7-loop braid could be more widely known, and also to help readers with the instructions in the Boutrup/ Speiser monograph. The instructions assume a familiarity both with loop braiding, and with interpreting written instructions for loop braids. That’s because the monograph was written as a supplement to Speiser’s OEPBforLB (see below) which includes detailed loop braiding instructions.

European Loop Braiding: Investigations and Results–Part II Instructions for Letter Braids in 17th Century Manuscripts by Noémi Speiser and Joy Boutrup
[Parts I and II are separate publications—II is the one on letter braids.  Available from BraidersHand. They are supplements to OEPBforLB, with new research and discoveries] —NOTE: Vol.s III and IV are now out, but I haven’t read them yet—will be buying them in Aug at Braids 2012.

Noémi Speiser’s Old English Pattern Books for Loop Braiding, 2000 —link to my review of this book, as well as her Manual of Braiding.

© 2011–2018 Ingrid Crickmore
See full copyright restrictions and permissions at the bottom of the sidebar (if you are on a small screen device, the ‘sidebar’ may appear somewhere other than at the side of the screen). 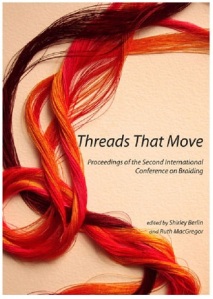 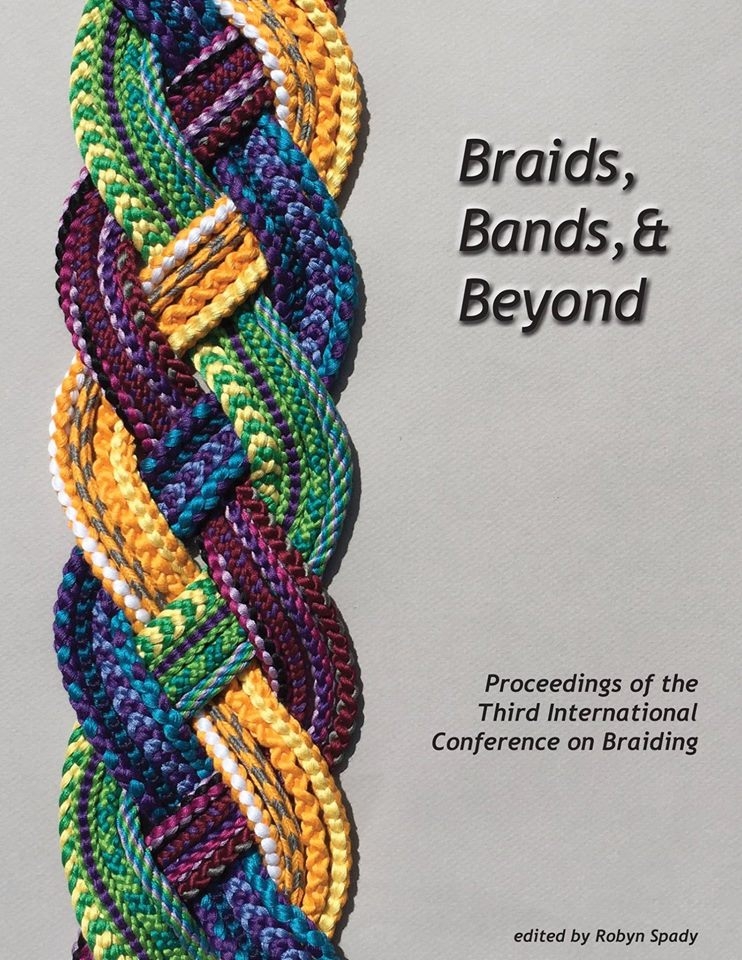