I wasn’t trying to make a Year of the Snake fingerloop braid when I made the first of these curvy braids last month, shortly after Chinese New Year.

I was experimenting with color-linking in a solid-rectangle double braid. I liked the way the color-patterns turned out, but the braid itself didn’t look right…it was sort of straight, but not quite. Slightly uneven along the edges.

It was only when I started ‘plumping’ the braid up and down after it was finished*¹ that the curves developed…The braid seemed to want to deform into regular waves. So I just helped that along, and then wet the braid and let it dry on a towel. I made a few more in slight variations of the same kind of alternating side-to-side linking, and all were easy to loosen up into wavy, undulating braids after they were made. 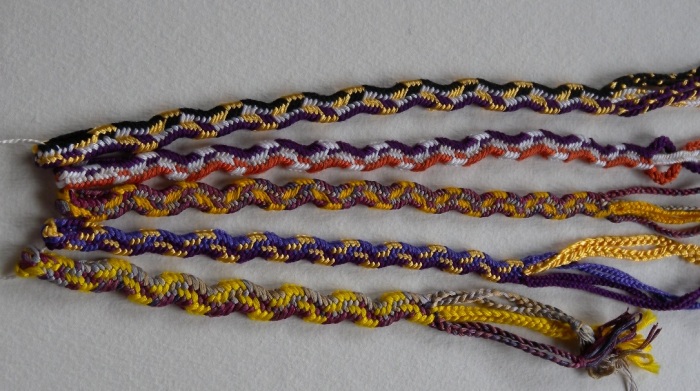 But these curvy braids require color-linking during some of the loop transfers, not at the loop exchange. The orange, yellow and gray flat double braid in my right sidebar→ also has this type of color-linking. In the curvy braids the linking shifts from the left to the right side of the braid, and then back again – which must be the reason the braid ends up being wavy.*² Flat braids with this kind of color-linking end up straight, not snaky. I assume that’s because after the braid is done, and the two layers of the braid are spread open (book-like), any tendency to curve on the left of the midline is cancelled out by the mirror-image tendency for an opposite curve on the right.

Update: I now have two tutorials that teach color-linking as part of the loop-transfers, one for 7-loop braids and one for 13-loop braids. Both are flat versions of square braids, whereas these “snake” braids are double braids of the ‘solid rectangle‘ shape, but the linking method is essentially the same for both. In flat braids, it’s always the case that any linked areas have mirror-image symmetry on the left and right sides of the braid, which must be why those braids do not deform into curves, while tightly-braided solid-rectangle versions without mirror-image symmetry do curve.

Btw, Laverne Waddington gets the credit for matching up these braids with the Chinese New Year—I never would have made the braid~snake~new year connection myself! I showed the braids to Laverne at a weaving workshop she taught here in California a couple of weekends ago, and she immediately said “Snake braids–for the year of the Snake!” So it’s because of Laverne that this post has a more interesting title than, say – “Curvilinear Double Braids.”

If you want to learn how to make the curvy braids, it would probably be best to try this kind of color-linking in a straight braid first. Which is one of the many tutorials I’ve been trying to decide on—which to make, that is…

So here’s a poll: Which one do you want next, if any? There are also the rest of the 12 different double braid shapes, I’ve only covered four so far.
(leave your vote in the comment field below this post.)

Realistically, it isn’t possible for all of the tutorials in the list to be “coming soon.” Especially considering how easily I get distracted…I need to prioritize somehow.

At least lately I’ve been distracted by braiding, instead of my usual distraction—wasting time on the internet! On that same off-topic, I’m back home again after being gone for a month at my mother’s (she was sick, but is now much better). It was amazing being almost completely away from a computer for a whole month. Even though I watched a couple hours of tv a day with my mother, I was more productive there than I am at home. I’m thinking of trying out a program called MacFreedom that somehow helps you set limits on the time you spend online…

*¹ I highly recommend “plumping” and loosening up any loop braid as soon as you finish it—helps the braid relax, fill out, and look better after the lengthwise stretching that happens while you’re braiding it.

*² Each of my curvy braids has two or three color-groups that are linked where they meet during the braiding procedure (to keep those colors from crossing each other). The braid below has two such color groups: 3 purple loops, and 3 blue. In addition, each braid has one more color-group that wanders freely back and forth across the braid, crossing both other colors, and never being linked. In the braid below, this “wandering” color group comprises 3 loops of shiny gold rayon.

There’s a slight difference in the braiding method with an odd-number-of-loops double braid. You don’t do a full loop exchange move. Instead, the ‘extra’ or ‘odd’ loop of one hand simply gets passed over to the other hand after the first hand’s braiding moves are done. Or else this can be done as part of the inner loop transfer of each hand – the 1st and 3rd loop transfers in a solo-braiding cycle. (The so-called Spanish braid of 7 loops is essentially an odd-number-of-loop double braid–that odd-loop passage is done as part of its third and fourth loop transfers).

Note–certain color patterns are only possible with even numbers of loops! So both types of double braids are useful to know.

© 2013–2020 Ingrid Crickmore
See full copyright restrictions and permissions at the bottom of the sidebar (if you are on a small screen device, the ‘sidebar’ may appear somewhere other than at the side of the screen).

7 thoughts on “Year of the Snake”

(To those who have donated here: Thank you! Your appreciation truly encourages me to keep going with this blog! ~ Ingrid)
© 2010–2020 Ingrid Crickmore
With the exception of photos of or by others, or of the work of others, the content of this blog (Loop Braiding) may be shared and distributed non-commercially, in print or by email, if and only if any such content includes this copyright notice in full, as well as the full url(s) of the shared content.

Content of this blog may not be posted, reposted, or embedded online, sold in any form or format, or used in fee-based workshops without my express permission, with the following limited and specific exceptions: My "Scribd" document on 3-loop braids may be embedded on non-commercial websites; and "Pinning" on Pinterest of my photos of my own work is allowed. For the purpose of this copyright, "non-commercial" means the site-owner derives no monetary or material compensation or income from the website in which my document in embedded; or from any advertisements, links or endorsements on said website.