Update Sep/10/2017: Now with videos!!!! Since I first made this post, Fumiyo Kitahara has added videos! Plus photos and tips on how to organize and handle hand-held loops in making traditional Japanese braids, including tips on how she deals with large numbers of loops!

I just found out about an exciting new loop braiding blog: Fumiyo Kitahara’s Kumihimo with Loops (the Japanese term for Kumihimo with loops is Kute-uchi) 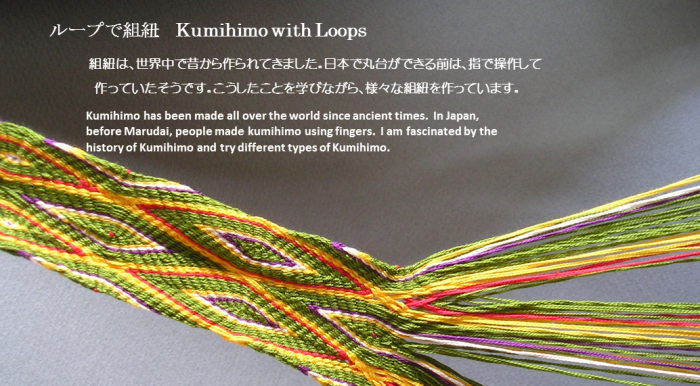 I first met Fumiyo Kitahara through my blog, but got to meet her in person at Braids 2016 in Tacoma, Washington. There she showed me how she makes the Itsukushima braid as a solo braider with 22 hand-held loops! (Itsukushima is the braid I blogged about back in May 2016 when I was trying to replicate it with fingerheld loops.)

And she explained an important detail about the structure that I would never have been able to figure out from the Japanese instructions in Masako Kinoshita’s book.*

That’s what can happen at an international braiding conference – you meet people you would never have a chance to meet otherwise, and you learn not only what you came there to learn, but surprising and wonderful things you didn’t expect!

Fumiyo Kitahara is fascinated with the magnificent older kumihimo braids that are now mostly replicated on kumihimo stands, but were originally made by loop braiding. Although the larger ones were made by teams of braiders working together, she is reproducing them solo. She is now up to braids of 56 loops!

Her most recent braids just won second prize in a Kumihimo exhibition in Japan, a real honor. They are replicas of the Bansuishoku braids of Horyuji temple, like the in-progress braid in her blog’s header image above. (This type of twined kumihimo is now usually made on a specialized stand called karakumi-dai, but was originally made by loop braiding.)

Her new blog is in Japanese and English. She shows both finished pieces, and in-progress photos of her braids. For braids of many loops, she has designed and constructed a “helping hands” holder on which she can rest some of the loops while working with others.

She hadn’t yet devised this holder when she demo’d her 22-loop Itsukushima method for me, she had no problem working all those loops together on her two hands. But she says the holder makes it much easier to handle more than twenty loops. It is amazing to me that she can achieve such good tension in her larger braids, while only holding some of the loops at a time!

I have seen photos of a few different “helping hands” set-ups, made by present-day kute-uchi braiders for the purpose of making team loop braids as a solo braider. Fumiyo’s is perhaps the simplest one I’ve seen, she said it was very easy to build.

I am going to be watching her blog closely – I have a feeling that she will be coming out with even more replicas of the historic braids Masako Kinoshita wrote about in her huge book on the loop braiding origins of Kumihimo.* Plus, she says she is hoping to make and post occasional videos. That will definitely be something to look forward to!